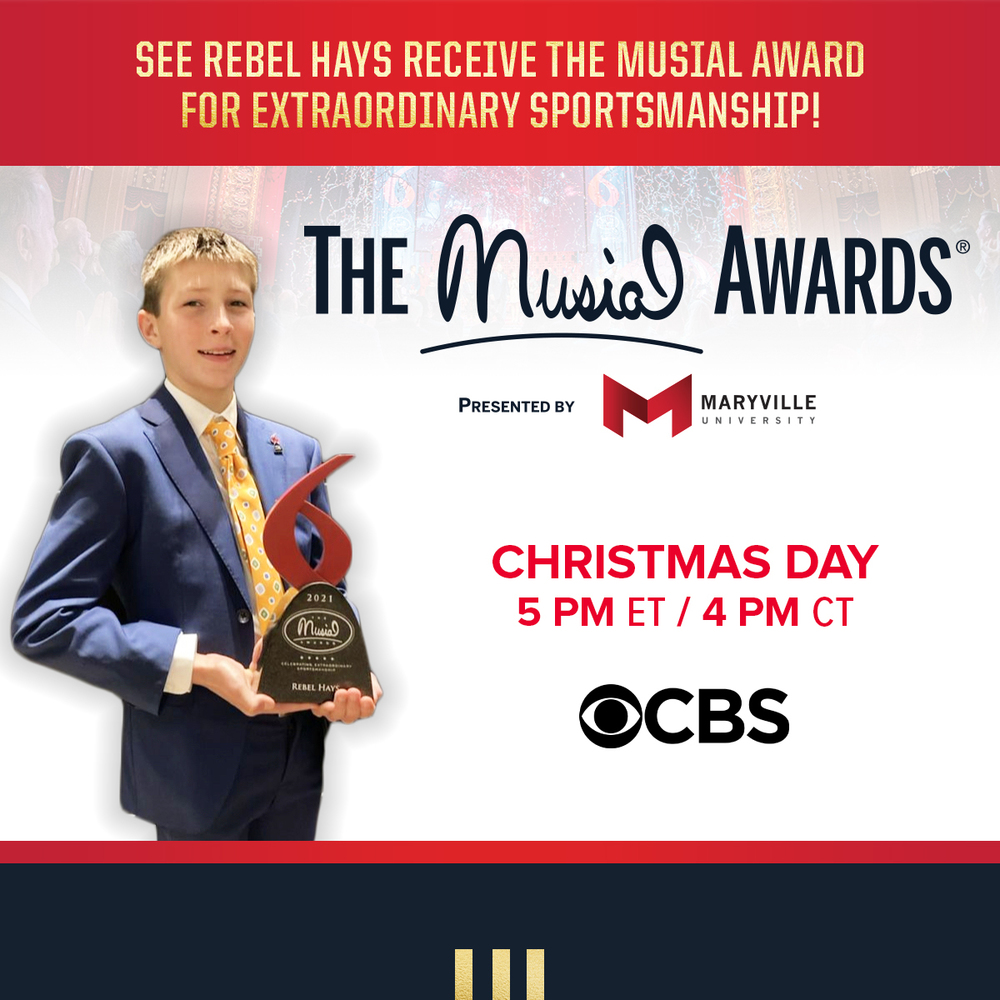 Rebel Hays Honored on the Musial Awards on Christmas Day!

MUSIAL AWARDS TO AIR ON THE CBS TELEVISION NETWORK AND STREAM LIVE ON PARAMOUNT+ ON CHRISTMAS DAY AT 5 P.M. ET / 4 P.M. CT

ST. LOUIS – Dec. 20, 2021 – The Musial Awards will deliver added holiday cheer this weekend. The inspiring awards show honoring extraordinary sportsmanship airs on the CBS Television Network and streams live on Paramount+ Christmas Day at 5 p.m. ET / 4 p.m. CT. Viewers from coast to coast will get to see the top moments and uplifting stories of kindness and selflessness celebrated at the 2021 Musial Awards, which took place last month at Stifel Theatre in St. Louis.

The Musial Awards Presented By Maryville University recognizes the year’s greatest moments of sportsmanship and those in sports who embody class and character. The awards are named for St. Louis Cardinals legend Stan Musial, a beloved baseball superstar and civic icon who was the ultimate good sport. This year’s Musial Awards honorees include “The Great One” Wayne Gretzky, National League MVP Bryce Harper, Olympic high jump champions Mutaz Barshim and Gianmarco Tamberi, Scripps National Spelling Bee winner Zaila Avant-garde, Arkansas 12-year-old cross country runner Rebel Hays and others who have shown remarkable sportsmanship. All will be featured in the Christmas Day broadcast.
Since 2019, CBS Sports has been the official television partner of the Musial Awards. In addition to the Christmas Day airing on the CBS Television Network, the one-hour show can be seen on CBS Sports Network on Tuesday, Dec. 28 at 7 p.m. ET / 6 p.m. CT.

“We are grateful that CBS provides us the opportunity to share the Musial Awards with the entire country,” said Frank Viverito, president of the St. Louis Sports Commission, which produces the event along with its affiliated National Sportsmanship Foundation. “Filled with hope, joy, and stories that reflect the spirit of the holiday season, it’s a perfect match for the Musial Awards to be airing on Christmas Day. We hope viewers throughout the nation will gather with their loved ones and enjoy what we call the most inspiring night in sports.”
In partnership with the St. Louis Sports Commission and the National Sportsmanship Foundation, the Musial Awards broadcast is produced by Al Roker Entertainment, the production arm of 14-time Emmy award-winning TV personality Al Roker. The show is hosted by veteran St. Louis anchor Mike Bush, who has emceed the Musial Awards for 16 years.
Sponsors of the Musial Awards broadcast include Maryville University, Edward Jones, Enterprise, Lexus, and World Wide Technology.

The Musial Awards live show takes place annually on the Saturday before Thanksgiving at the historic 3,000-seat Stifel Theatre in Downtown St. Louis. The event has occurred in St. Louis since 2005. In addition to keeping Stan The Man’s legacy alive, the mission of the Musial Awards is to encourage kindness, selflessness, integrity, and civility in sports and society – and to inspire people across the nation to be good sports. Since 2011, Maryville University has served as the event’s presenting sponsor. The school’s involvement, leadership, and generosity have helped make the Musial Awards the most important awards in sports®.